First there was Captain Video, then there was Space Patrol, and a few months later, in early 1951, there was Tom Corbett, Space Cadet. Tom Corbett holds the unique distinction of being one of the few shows to air on NBC, CBS, ABC, and DuMont over the course of it’s 4 years on the air.

This is the first issue of Tom Corbett Space Cadet that we’re offering on our site. It will not be the last! I chose to start with this one because I think the cover is bizarre and fantastic.

This is a digest sized reprint. 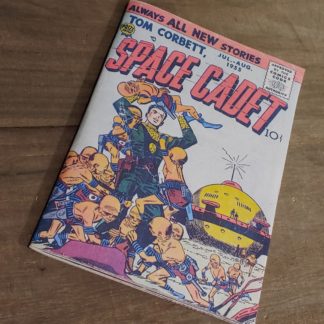