High Adventure in the Wild Vast Reaches of Space! Missions of Daring in the Name of Interplanetary Justice, Travel in to the future with this Buzz Corry 8″, “Mego” style doll.

Buzz, played by Ed Kimmer, was the leading man of the 1950s Space Adventure television show Space Patrol. He appeared on screen live, 6 days a week, in over 900 televised episodes.

This figure, and his clothes, are assembled by hand. There may be slight variations between production runs as a result. The packaging is clamshell style, and resealable.

For a generation of kids, Buzz Corry was The hero to eclipse all others. Calm, collected, and able to throw a solid right hook, Corry exemplified everything that was good and right and just about the future.

This 8″ Space Hero figure is the primary reason I started making toys. I wanted a Buzz Corry action figure to sit on my desk. There were dozens of Space Patrol toys (and I have most of them!) but they were largely accessories: Space-o-phones, ray guns, space helmets, and occasionally paper dolls and army men.

The modern Action Figure didn’t exist in the 1950s (thank GI Joe for that term, which emerged in 1964), and Space Patrol, in spite of nearly 1200 episodes between Television and Radio, was off the air by 1955.

But I wanted this toy to exist, and I couldn’t think of a better way to bring it to life. I’m really pleased with how this one has turned out, and I hope you like it. 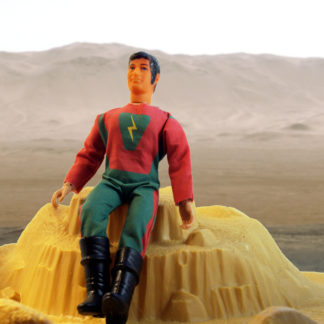