Another Tomland Star Raiders figure. This one is called Zoth, or Coth, or Koth depending on where you are on the internet. I’ve never seen it on a card, so I can’t speak to what it would have been called originally, but I like the name Zoth myself.

Zoth is a little rougher than some of the other Tomland toys I have for sale at the moment. His clothes are a little tattered, his head is a little loose. That being said, he looks Beautiful with his bright pink cape and hood. His joints are a little loose, but he still poses and stands without issue, and I do not see or feel any cracks in his cheap, thin, blow molded body. 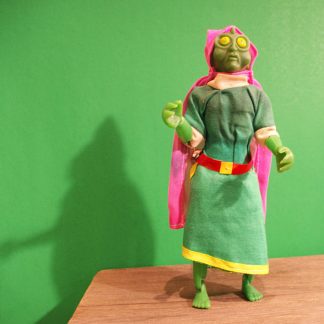