One of two variants of the famous (infamous?) Bulletman we’ve put together. Comes in a resealable clamshell packaging, with a custom printed cardback.

This toy is at the 8″/Mego scale, and is hand assembled by our team.

Bulletman was originally published by Fawcett comics, who brought us such gems as Captain Marvel/Shazam. The character fell in to the public domain (probably when Fawcett failed to renew their copyrights correctly, DC sued Fawcett in to bankruptcy over the similarities between Captain Marvel and Superman.)

In the 70s, Hasbro released an unlicensed version of this character as a 12″ action figure as part of their GI Joe line. This is not that toy.

Bulletman wore several different costumes over the years, and I’ve put together a couple of variant costumes for our Bulletman figure as well. This is version one. Look for Version Two soon. 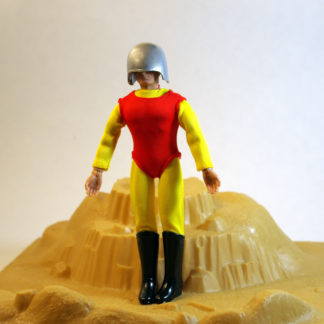